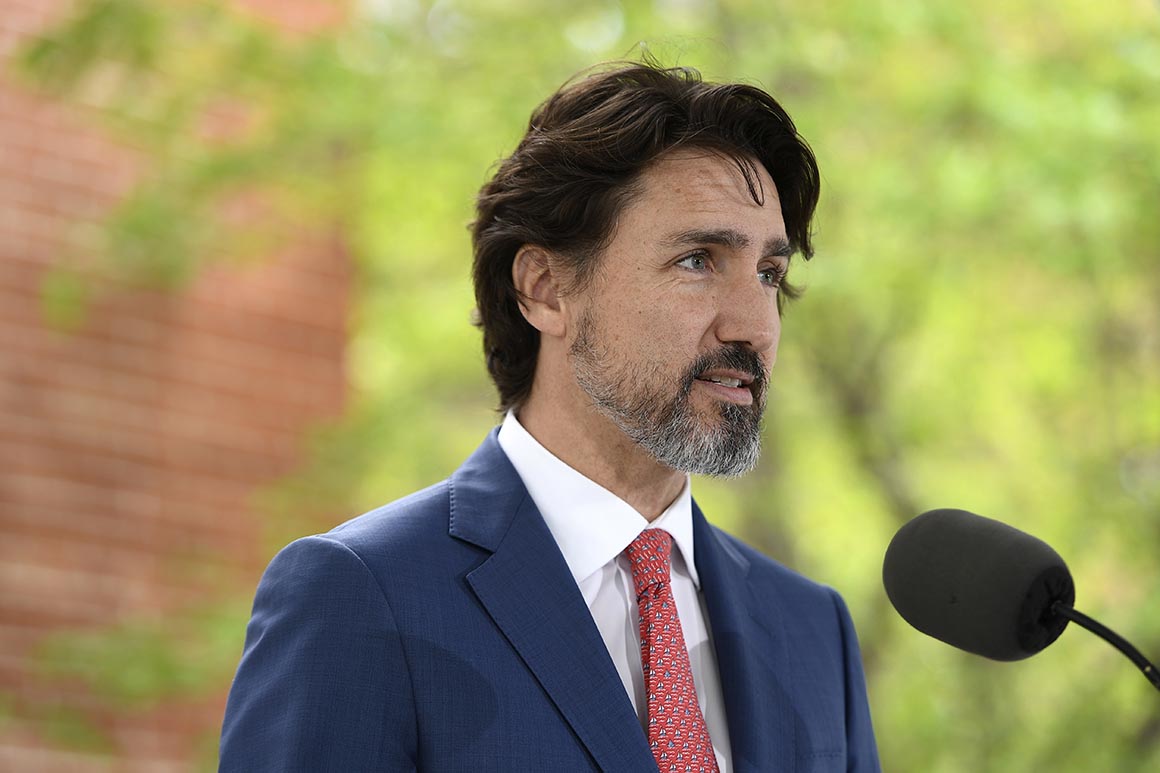 OTTAWA –; Justin Trudeau is leading Canada amid a record-shattering deficit, a decimated jobs landscape and a health crisis that has killed more than 7,000 Canadians.

Yet strong polling for the prime minister and his Liberal government since the start of the Covid-19 pandemic are fueling speculation in the Canadian capital about whether the Liberals are considering a quick return to the polls.

The fixed election date is set for 2023, but Trudeau leads a minority Parliament, which can fall at any time –; toppled by the opposition or else triggered by the government.

Those around Trudeau insist he is focused on the pandemic with the idea of an early election call nowhere on the radar.

But some pollsters suggest an electoral opportunity is materializing for Trudeau. Pollster David Coletto said the prime minister’s approval rating has climbed back to the "honeymoon" high achieved after he first came to power in 2015. "They’re clearly back in majority territory, if an election were held today," the CEO of Abacus Data said in an interview.

The asterisk, Coletto added, is that right now Canadians view their governments –; federal and provincial –; entirely through the lens of the emergency. The support may not persist or translate into votes.

But Liberals, like veteran MP Wayne Easter, say that while chattering classes are speculating about an election call it’s not a discussion point among political colleagues.

"That”;s one of the craziest ideas," Easter said when asked about the possibility. "Polls may be great things for dogs, but they”;re not what we need to be thinking about right now."

Easter chairs the House finance committee which has spent months now studying the government’s response to Covid-19. He said politicians should be focused on getting Canada back to normal as fast as they can. The minority Parliament is working reasonably well, he added, so anyone even considering moving ahead with "political opportunism needs to get their ass kicked."

Last fall, voters reduced Trudeau”;s powerful majority mandate to a minority of Parliament”;s seats following a corruption probe and a racism scandal. On weakened footing, his Liberals must earn the support of political rivals to pass legislation and to keep the government afloat.

While the government’s pandemic response has faced criticism, Coletto says the next few months could still be opportune for Trudeau. The Covid-19 financial aid checks are in the mail, the number of new Covid-19 cases has slowed and the economy is gradually reopening.

Once health fears subside, Trudeau could be tempted to seize the moment and return to the polls in search of a new mandate before the government is faced with unpopular choices around the financial mop-up, possibly in the form of tax hikes and deep cuts to program spending.

"There’s risks in not calling an election because the difficult period of governing is coming up," said Coletto, arguing it will get much harder as this thing plays out.

He suggested a fall election call might make more sense than waiting for the spring when many difficult decisions will have to be made. "There’s a minefield coming up that could hurt them a lot."

Trudeau was asked about the possibility of going back to the polls during one of his daily briefings last week.

"I haven”;t heard a lot of Canadians demanding an election right now," Trudeau said. "There will be many challenges that we will face over the coming years … there will be many debates in Parliament and eventually in an election. But I”;m not going to speculate on when that might be."

A senior government official stressed to POLITICO that there has been zero internal consideration about the possibility of an election. They insist Trudeau”;s absolute preoccupation is on helping Canadians get through the Covid-19 emergency.

The insider, who spoke on condition of anonymity because they were not authorized to discuss internal matters in public, says Canada had its election last year and there”;s been no time to think about heading back out on the campaign trail.

They said, on top of that, approval-rating bumps during times of crisis are completely non-partisan because the public, generally, wants whomever is in office to succeed.

The Liberals could look to strike before their main rivals, the Conservatives, are ready. The Conservatives, who hold the second-most seats in Parliament, will only choose a replacement for outgoing leader Andrew Scheer in late August. The New Democrats, the third-largest national party, are strapped for cash.

Thanks to near-daily TV news conferences, Trudeau has soaked up far more news coverage than his opponents. With Parliament effectively shut down until September there are few opportunities for opposition leaders to be front and center.

Even the timing of an economic recovery could work in Trudeau”;s favor for a fall or spring election call. Stephen Poloz, the newly retired Bank of Canada governor, has said he”;s optimistic a healthy rebound will pick up steam in the second half of 2020.

History has shown that popularity during crises does not always translate into electoral victory. Take former British prime minister Winston Churchill’s massive defeat at the polls after the Second World War.

Indeed, success for the Liberals would be far from a lock.

The economic impact on individuals will be significant. Experts predict many businesses will be forced to close for good and that lots of people may still be out of work a year from now.

The government”;s rescue package has come under fire for having lax oversight around who may access the financial support, a feature the Liberals have argued was necessary to get the program rolling as quickly as possible.

The state of government finances will create additional obstacles. The federal deficit this year has been projected to climb to record heights above C$250 billion and perhaps as high as C$300 billion, while the overall federal debt could eclipse C$3 trillion.

The government had no choice but to provide significant jolts of financial support –; but navigating the financial clean-up will be far more difficult. Just this might serve as motivation to get out ahead of the accounting.

Once the worst of the pandemic has passed, whatever government is in power will have to produce a plan to straighten out the books that will almost certainly involve the unpopular steps of strict spending cutbacks and possible tax hikes.

Other aspects of the Liberals”; pandemic response have also faced criticism. Health officials have been taken flak for allegedly acting too late to close borders and later still to encourage Canadians to wear masks. The government has also been accused of failing to do enough to support key industries like the energy sector, mismanaging the national stockpile of personal protective equipment and of being too slow in acquiring desperately needed supplies from abroad.

Daniel Béland, director of McGill University’s Institute for the Study of Canada, said most incumbents at the federal, provincial and state levels have enjoyed boosts in popularity since the start of the pandemic. Polarizing leaders like U.S. President Donald Trump have been the exception, he added.

Béland said it might be tempting for the Liberals to call an election during the next year, but it would come with lots of risk.

A fall election, he said, would be "very unlikely" given the pandemic may still not be under control and people could accuse them of endangering the public, especially vulnerable people. "Exploiting the situation for political gain so rapidly after the end of the crisis … could also be a political gamble," he said.

Whenever the next election arrives, Trudeau can expect to confront some of the same hurdles he faced last fall.

Leading up to last October”;s vote, Trudeau was haunted by a corruption scandal related to engineering and construction firm SNC-Lavalin. Then, in the middle of the campaign, a bombshell Time magazine report showed images from two decades ago of Trudeau in brownface, which was followed by the release of more photos and videos of him in racist makeup.

Trudeau avoided defeat in the election and returned to the Prime Minister”;s Office with a new approach –; less flash and even a more serious look underscored with a new, much-talked-about beard. He had a much more low-key approach during the first few months of his new minority mandate, allowing for Deputy Prime Minister Chrystia Freeland to take some of the spotlight.