‘This Is a Price We Must Pay.’ China Ditches a 2020 Growth Target in a Worrying Sign for the Global Economy

The Chinese Communist Party generally doesn”;t set targets it can”;t meet–;or at least fudge with a modicum of credibility. Skepticism over official statistics aside, of the 38 objectives set out in its 2019 Work Report, all were met. Growth at 6.1% fell within the 6% to 6.5% prediction; 2.5 million more new jobs were created than the 11 million aimed for; more than the targeted 10 million people were lifted out of poverty. In fact, only one Work Report target has not been hit since foreign trade growth fell shy of expectations in 2015, according to the Trivium analysis firm.

And so, following a 6.8% first quarter contraction due to the coronavirus pandemic, all eyes were on Premier Li Keqiang on Friday when he delivered the 2020 Work Report at the start of the National People”;s Congress (NPC)–;China”;s rubberstamp annual parliament. The upshot: China would “;not set a specific target for growth this year,”; said Li, the first time in three decades it failed to do so. “;We must redouble our efforts to minimize the loses resulting from the virus,”; he added.

It”;s another bleak sign for the global economy, given the world”;s top trading nation has weathered COVID-19 better than most. Instead of growth, employment now appears the focus of China”;s macroeconomic policy, with Li setting out the goal of adding 9 million urban jobs over the year. The state also aims to eliminate rural poverty–;a chimeric ambition given poverty is considered a relative rather than absolute standard these days–;and cut business taxes by $350 billion, while keeping consumer inflation to 3.5%.

In laying out these policies to cadres sporting medical masks in Beijing”;s cavernous Great Hall of the People, Li emphasized that efforts to stymie the virus”;s spread had, and would, continue to take priority. “;This is a price we must pay, and a price worth paying,”; he said.

Li’s approach wasn”;t entirely unexpected. In the first four months of 2020, China”;s fiscal revenues fell 14.5% year-on-year, the Ministry of Finance said Monday. And with families around the world tightening their belts, sales of the kind of low-cost fashion and consumer items China previously exported with vigor will take a huge hit. Domestic consumption, too, is struggling as Chinese shoppers spying lean times ahead adopt more prudent habits. The nation”;s budget deficit will swell by 1 trillion renminbi ($140 billion) this year to aid recovery, Li said.

“;China’s economic recovery rate must reach the highest level in the world,”; Hu Xijin, editor of China”;s state-run Global Times, tells TIME. “;This is the strong expectation of the entire Chinese society.”;

Beijing’s masterplan appears to strengthen state-run enterprises to secure jobs in the short-term and prioritize investment in new technologies to ensure long-term advantage. Due to be approved at the NPC is a proposal to invest some 10 trillion renminbi ($1.4 trillion) over six years to 2025 in developing key technologies from 5G networks to artificial intelligence. The investment drive echoes China”;s controversial “;Made in China 2025”; plan to dominate strategic industries, thus reducing its dependence on foreign–;particularly American–;technology.

This is a special priority after the Trump administration ramped up efforts to stop Chinese firms such as Huawei–;the world”;s top telecoms equipment supplier–;from using American components, particularly semi-conductor chips. On May 16, the Commerce Ministry closed a loophole Huawei had been exploiting to keep using American components. The Shenzhen-based firm has a 12-month stockpile of those crucial parts, according to reports, but needs to find other sources pronto as tech decoupling gathers pace. According to a report by research group the Hinrich Foundation, “;the intensifying nature of the U.S.-China tech war …; has sparked a flurry of protectionist policies in Washington and elsewhere.”;

Yet there was no mention of the trade war in Li”;s 23-page Work Report, other than to reconfirm Beijing”;s commitment to the “;phase one”; deal struck with Washington last year. Today, the world”;s two biggest economies have hiked tariffs on $470 billion of goods. Given President Trump”;s broadsides over the origins of COVID-19, and economic pressures on both nations’ economies, there are significant doubts whether the existing agreement is salvageable. 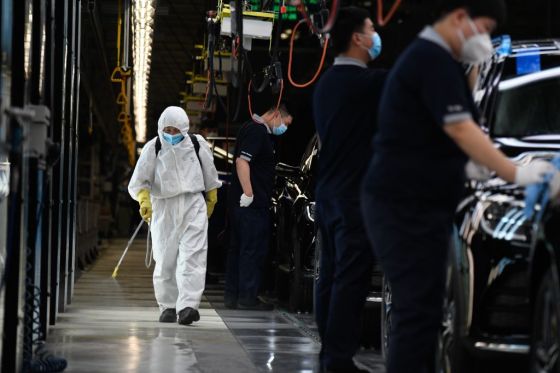 Wang Zhao/AFP via Getty Images A cleaner wearing protective gear sprays disinfectant along a production line at a Mercedes Benz automotive plant during a media tour organised by the government in Beijing on May 13, 2020, as the country’s industrial sector starts again following shutdowns during the COVID-19 coronavirus outbreak.

On Tuesday, Li signaled that American firms are still welcome in China by writing a congratulatory note to U.S. industrial conglomerate Honeywell, which opened its new emerging market headquarters and innovation center in the coronavirus epicenter of Wuhan. Investments of this nature don”;t typically merit personal messages from top leaders, though given spiraling Sino-U.S. relations, Li”;s letter pointedly set out that “;encouraging foreign companies to increase investment in and cooperation with China will not change.”;

Economists are meanwhile generally bullish about China”;s prospects. “;We do think that China will stage a faster recovery than most other major economies,”; says Julian Evans-Pritchard, senior China economist for Capital Economics, in a briefing note. “;That said, we think the government is right not to be too ambitious about the speed of the rebound.”;

It”;s good news for President Xi Jinping, who had been under pressure for China”;s fumbled early response to the outbreak, including the detention of whistleblower doctors. But since then, “;Xi has built on the failures of Western democracies and the relative success in containing the virus in China,”; says Prof. Steve Tsang, director of the SOAS China Institute at the University of London. “;I don’t think Xi”;s position is at any risk.”;

Hong Kong”;s Basic Law (the territory’s mini-constitution) says that its own lawmakers are required to pass a national security law, but an attempt to do so in 2003 had to be withdrawn after what were then the largest protests the financial hub had seen. No attempt has been made since. A clearly frustrated Beijing is now effectively bypassing Hong Kong’s legislature and a motion to draw up the new law is set to be approved by the close of the NPC on May 28. Critics say it has worrying implications for political freedom in the enclave. “[They are] completely destroying Hong Kong,” said Dennis Kwok, a pro-democracy lawmaker. 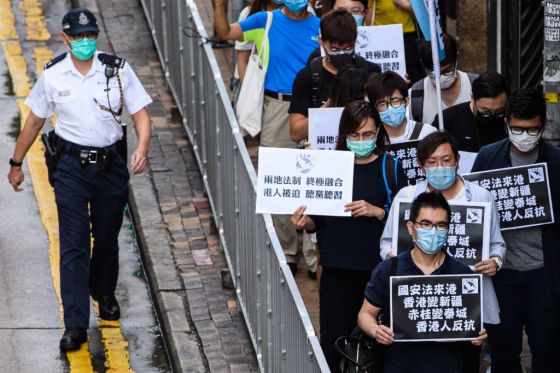 The topic is also set to become the latest bugbear between China and the U.S., with senior figures on both sides of Washington’s political aisles opposing the encroachment on Hong Kong’s autonomy. Last year, Trump signed the Hong Kong Human Rights and Democracy Act that linked the territory’s special trade status to its continued autonomy from Beijing. U.S. senators are now set to introduce a bipartisan bill to sanction Chinese officials and entities who enforce the new national-security legislation, reports the Wall Street Journal. “;Attempting to circumvent the [Hong Kong] legislature shows a complete disrespect for the rule of law,”; tweeted Democratic House Speaker Nancy Pelosi.

Renewed protests have already began cropping up in Hong Kong after the relaxation of weeks of coronavirus lockdown. Opposition to the new legislation is expected to be particularly fierce as the anniversary of the Tiananmen Square crackdown approaches on June 4–;a date traditionally marked by defiant candlelit vigils in the only place in China allowed to hold them, at least for the time being. The city’s democracy movement is meanwhile hoping to repeat its landslide success in last November’s local council elections in polls for the legislature in September. It aims to take control of the chamber and stymie the Beijing-backed administration’s attempts to govern.

Bringing Hong Kong”;s protesters to heel seems to be one NPC pledge that can’t be easily fudged.