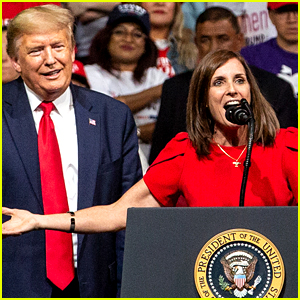 Martha McSally, the Republican senator from Arizona, is currently running for re-election and people are pretty shocked by what she just asked her supporters to do.

At a recent event in northern Arizona, McSally asked her supporters to skip a meal and give the money from that meal to her campaign.

Arizona’s Family obtained an audio recording in which McSally is heard saying, “;We”;re doing our part to catch up, you know, to get our message out. But it takes resources. So, anybody can give, I”;m not ashamed to ask, to invest. If you can give a dollar, five dollars, if you can fast a meal and give what that would be.”;

McSally‘s campaign spokeswoman released a statement after the audio went viral. She said, “;This is a dumb non-story about a candidate making a joke on the stump.”

While McSally used to be viewed as a moderate, she is now closely associated with the views of Donald Trump and she joined him at a campaign rally earlier this year.

NEW: @SenMcSallyAZ is "telling her supporters that they could come up with more campaign cash to donate, if they just 'fast a meal.'"

Former Arizona GOP U.S. House and gubernatorial candidate: "It does feel like it's a little bit of an act of desperation." #azsen pic.twitter.com/XfFXdxUjcQ