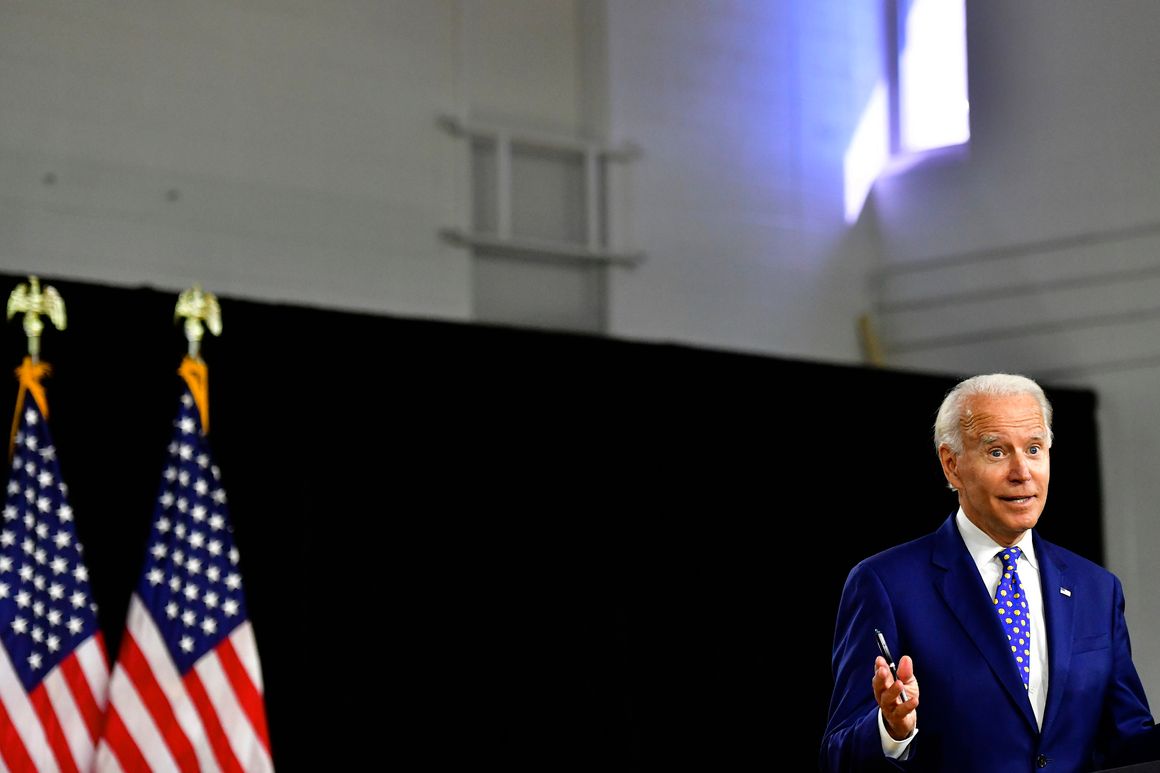 There”;s a good reason why Democrats shut Joe Biden out in 1988 and 2008 when he ran for president, and why he had the sound sense to sit out the 2016 contest. He rambles. He plagiarizes. He flip-flops. Over his long career in Washington, he has become the human embodiment of the political gaffe.

The press has documented Biden”;s limitations in such detail that if the presidency was a regular occupation, and Joe”;s press clips were job references, his recruiter would dump his application in a waste can without even bothering to send him an insincere note wishing him luck elsewhere. But instead of hammering him and pouring vinegar on his wounds, the press has bestowed “;strange new respect”; status upon Biden–;strange new respect being the clever trope Tom Bethell invented to describe the press corps”; sudden shift from negative to positive coverage of a politician.

That happens often. It happened to both Clintons, to Obama, even to Trump. With Biden, though, there”;s a twist. In his case, “;positive”; coverage–;the kind of wet-kiss treatment that helps a dented and flawed candidate slide right into the White House–;consists primarily of ignoring him.

This isn”;t to suggest that campaign reporters blew off the assignment of covering Biden. POLITICO”;s Ben Shreckinger explored “;Middle-Class Joe”;s family fortunes.”; Everybody reprised his plagiarism scandal. The politically convenient revision of his get-tough criminal-justice policies got an airing, and the press chased the sexual assault allegations leveled against him. But especially in the early going, when he was busy losing both Iowa and New Hampsire, something a presidential candidate is not supposed to do, the coverage seemed more about writing his candidacy off than obliterating it.

For much of his political career before becoming vice president, Biden was regarded by the press as a doofus, a beamy boat that sat high in the water and took up a lot of space but wasn”;t very swift. The best thing that ever happened to him besides winning a Senate seat from the hamlet of Delaware was the day Barack Obama picked him as a running mate.

For eight years, Biden perfected the art of playing the understudy, attending state funerals, representing the United States at the World Cup, campaigning in midterm elections–;all the garbage duties we assign to vice presidents. He began to accrue strange new respect points in those years spent inside Obama”;s protective penumbra, and to give the man credit, he was probably a good sounding board. As my friend Timothy Noah wrote in the New Republic in 2012, “;Biden is not a stupid man. He”;s a smart man who often says stupid things. When you know him, apparently, you don”;t feel inclined to hold that against him.”;

The greatest political advantage of being vice president is that because you are so powerless, little blame can be sourced to you (unless your name is Dick Cheney) during your time as the president”;s mannequin. Biden”;s press honeymoon got an extension when he declined to contest Hillary Clinton in 2016 for the leading role, providing reporters with empirical evidence of Biden”;s savvy. But the strange new respect that Biden had worked so hard to acquire vaporized when he entered the 2020 campaign.

He returned to his old bumbling ways, but gaffing has become so integral to his personality that he doesn”;t apologize for it anymore. “;I am a gaffe machine,”; he conceded in December 2018. “;If you have a problem figuring out whether you”;re for me or Trump, then you ain’t Black,”; he told a Black radio host in May. Earlier this month in an interview, he displayed the sort of jargon aphasia one associates with a stroke victim: “;Surplus military equipment for law enforcement–;they don”;t need that. The last thing you need is an up-armored Humvee coming into a neighborhood, it”;s like the military invading. They don”;t know anybody. They become the enemy. They”;re supposed to be protecting these people.”; Everybody wrote about what a horrible, out of touch campaigner he was. Some columnists, yours truly included, wrote that he was too old and scattered to be president.

My friend Washington Examiner columnist Tim Carney tells me that Biden”;s Obama shield weakened for a few months during the campaign as 1) he reexposed himself to press scrutiny and 2) reporters consumed themselves in a group swoon for new arrivals Elizabeth Warren, Kamala Harris and Pete Buttigieg. But then a miracle appeared! All the lefties running for president canceled one another out, and Biden, being the candidate closest to being a centrist, sort of won the nomination by default. “;Now in the general election he”;s protected again!”; says Carney. “;It”;s dizzying. Looks like even Biden is confused by all the reversals.”;

As he swept through the primaries, it looked like the worst-case scenario for Biden: The press would actually have to cover him again. As he steamed toward becoming the Democratic Party”;s presumptive nominee, the press corps prepared themselves for another Biden crack-up. But then Biden became the only lucky man of the pandemic as Covid-19, the No. 1 story of the year, demoted his candidacy from the spotlight.

As a vulnerable codger, he had a good excuse to sequester himself in his basement, burrowing so deeply that some took to calling him “;Punxsutawney Joe.”; And with Biden mostly in hiding, Donald Trump”;s blundering response has become the only real story of the campaign. Every time Trump opens his mouth, he convinces somebody out there to vote for Biden. If campaign finance law had any teeth, Biden would be forced to report Trump”;s initiatives to the Federal Election Commission as in-kind contributions.

From his lair, given the gift of almost total media invisibility, Biden has commenced spanking Donald Trump in the polls. The press, as it always does, has followed the sense of the polls in its coverage, presenting Biden as the likely winner. Who can blame them? Biden may not be a great candidate, but even Trump”;s own party thinks the president is destroying himself. Perhaps, back in 1988, if Biden could have persuaded the press to ignore him completely instead of actually covering him, he”;d be schmoozing through his 70s at the Joe Biden Presidential Library today instead of running, undercover, for office.

As Timothy Crouse writes in The Boys on the Bus, his 1973 classic about the presidential campaign press corps, reporters love to demonstrate their power by demolishing political lightweights like Biden who “;cannot assert his authority over the national press, cannot manipulate reporters, cannot finesse questions, [or] prevent leaks.”; As a public figure, Biden has always been that easily flustered, readily lampooned candidate, a continually derided campaigner. As a nonpublic figure, however, he”;s slowly been anointed a statesman. And now-silent Biden, as long as he does nothing and he keeps away from the microphone, grows in stature and respect. That”;s not true when the mics are live. Last week, Biden became a national punch line once more for calling Trump the nation”;s “;first racist president.”; Even Symone Sanders, a senior adviser on the Biden campaign, was quick to contradict the 77-year-old candidate. “;There have been a number of racist American presidents,”; Sanders said, cleaning up behind him.

But don”;t worry. Part of the strangeness of strange new respect is that it is never permanent. Should Uncle Joe be lucky enough to win the White House, the press corps will instantly rediscover their original view of him–;and America will wonder how he ever got there.

President Biden plans to move the White House onto the Acela and run the executive branch in like a sequel to Snowpiercer. Send sequel ideas to Shafer.Politico@gmail.com. My email alerts long for the respect of my Twitter feed. My RSS feed can”;t get no respect.