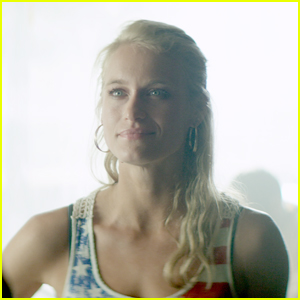 Leven Rambin‘s new crime flick The Big Ugly is a combination of a film noir with a modern-day Western, which opens theatrically in select cities, drive-ins and on-demand today.

The plot follows London mob bosses who invest in a West Virginia oil deal in a bid to launder dirty money but end up clashing with local criminals after one of their girlfriend”;s goes missing.

We talked with Leven about the film, her on-set partner in crime Nicholas Braun (Succession) and doing deep dives into Jake Gyllenhaal‘s body of work.

JJ: Tell us about your character and why you decided to do this film.

LR: My character, Kara, is an independent, recovering alcoholic local bartender who knows exactly who she is and what she deserves. She isn’t afraid to play with fire in order to do what’s right and get what she wants. She uses her assets and acute understanding of people to navigate through a man”;s world. I love how she more easily fits in with a room full of older men than to people in her peer group…she’s seen a lot.

JJ: Who did you hang out with the most on set?

LR: I spent my days almost exclusively at Cave Run Lake in Morehead, KY where we shot the filmed. Nick Braun and I were two peas in a pod pretty instantly. We laughed an insane amount and I’ll never forget his pitch-perfect Rascal Flatts karaoke.

Click inside to read the rest of Leven Rambin’s interview…

LR: The scene with Malcolm [McDowell]. Before we filmed it, he had told me all these amazing stories from working with Stanley Kubrick and how his bizarre audition process was for A Clockwork Orange. He hasn’t auditioned for a role since!

LR: The scene where Kara refuses Will’s money and to quit her job. It’s a very intimate scene that I feel revealed much about Kara and was a tender beat amidst utter chaos and destruction. (SPOILER ALERT!) I also loved the scenes with Vinnie (Jones) where we trap Junior (Brandon Sklenar). I felt Neelyn and Kara were very much equals in a lot of different areas. They were unlikely friends and accomplices to one another, and I liked their grit together.

JJ: Where have you been quarantining and with who? What have been some of your highlights and lowlights?

LR: I have been quarantining alone with my dog, Sookie, in my new home by the beach. I have found so much growth, healing, and security in learning to love to be alone and depend on myself. Now I realize I can do anything (and learn how to if I don’t know!)

Highlights: I directed and edited a short film. I also shot and directed a music video for a new artist on my iPhone (Coming out soon!) I”;ve written another film. I”;ve also been surfing and have enjoyed being outside. I”;ve also enjoyed being creative in the ways you connect with people: picnics, drive-bys, zoom parties, beach days and hikes… I”;ve never been on so many walks! Lows have been a sense of missing the work environment that I love- being on set, going to auditions and acting.

JJ: Have you discovered any new music, film or shows recently?

LR: I am making my own content now, writing and directing, but I love the freedom of just showing up as a character and playing in someone’s created world and collaborating on a large scale. I have learned to listen to things and watch content that makes me feel GOOD! For a while I picked an actor or director and watched their entire body of work. David Fincher and Jake Gyllenhaal were fun ones 😊. I’ve watched really old movies like Sunrise: A Song of 2 Humans and Anna Christie with Greta Garbo. I watch Broad City for belly laughs and Shark Tank really keeps me going for some reason.

How much would you spend on a custom BMW license plate?

From 9/11 to COVID-19, the Fight Against Financial Crime