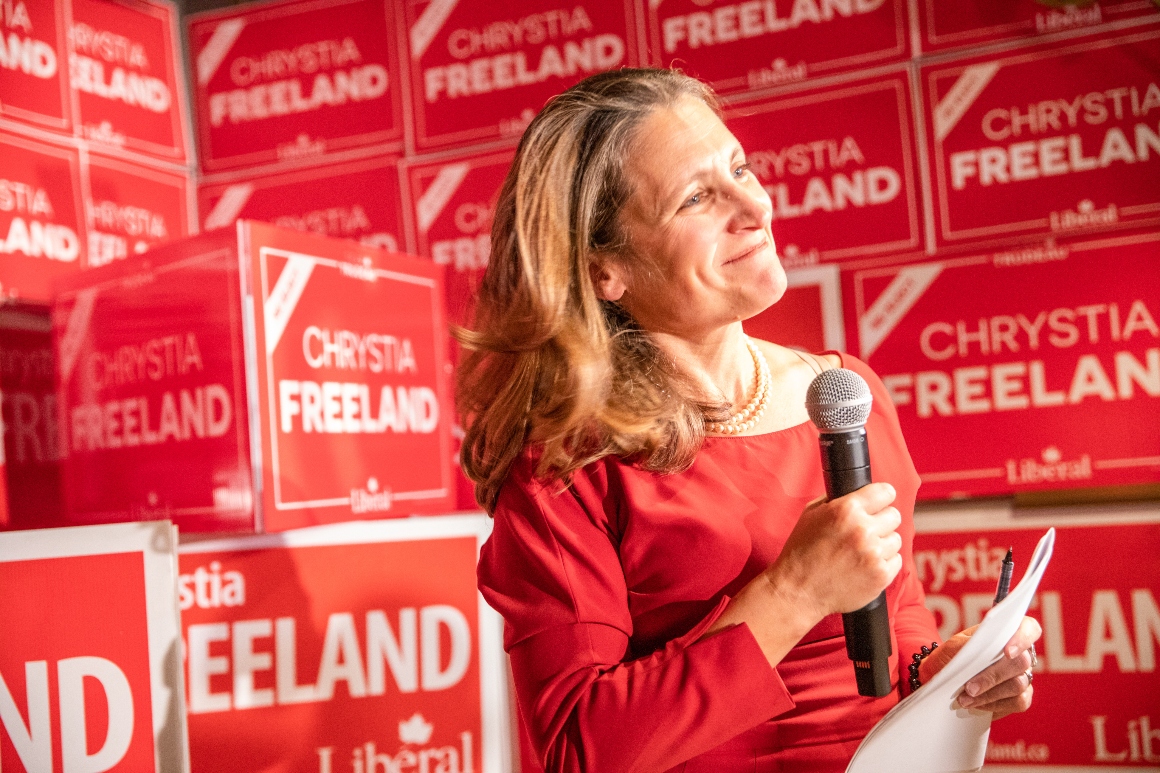 Justin Trudeau has tapped his “;minister of everything”; to run the nation”;s finances amid a government scandal, an economic downturn and a pandemic.

Chrystia Freeland, who has served as deputy prime minister since last fall”;s federal election, was named Canada”;s finance minister on Tuesday. She takes over from Bill Morneau, a wealthy Toronto businessman who resigned Monday evening during an ethics investigation into his ties to a charity that was briefly contracted by the Trudeau government to administer a pandemic-related federal program for students.

After years spent focusing on Ottawa”;s relationships, both foreign and domestic, Freeland becomes the first woman to take charge of the nation”;s finances –; all while the government is spending billions to keep Canadians and their businesses afloat. She does so as Trudeau seeks to pivot his Covid-19 response to encompass Liberal priorities like promoting the middle class, lowering carbon emissions and improving health care.

Shifting Freeland to finance allows Trudeau to put a fresh, forward-looking face on his government’s economic restart plan –; one that’s not tied to scandal, but is well-known and respected among Canadians and other countries who could do future business with Canada.

“;We need a long-term plan for recovery –; a plan that addresses head-on the fundamental gaps this pandemic has unmasked,”; Trudeau said.

Not lost on Freeland is the economic downturn”;s disproportionate effect on women. “;I”;m glad that I”;ll have an opportunity to bring my experience as a woman, as a mother, to this really important challenge our country is facing,”; she told reporters Tuesday.

She made sure to emphasize the importance of a “;green”; restart to the Canadian economy, a topic that reportedly prompted a clash between Trudeau and Morneau. “;It also needs to be equitable. It needs to be inclusive, and we need to focus very much on jobs and growth,”; Freeland said of the Liberals”; forthcoming economic plan.

As part of this agenda refresh, Trudeau has essentially halted parliamentary work until Sept. 23, when his government will present a new agenda subject to a confidence vote in the House of Commons. While the prime minister defended the move as a way to get Parliament”;s buy-in on his government”;s post-Covid-19 direction, opposition MPs accused him of trying to bury the ethics scandal that”;s engulfed Ottawa in recent weeks.

Freeland is widely respected in Canada and internationally. Since the federal election and during the roll out of pandemic programs, she has developed close working relationships with many of Canada”;s premiers and municipal leaders –; plenty of whom were less than enthused when the Liberals held onto power last year.

“;She”;s probably the most competent minister in the Trudeau government,”; Conservative MP Randy Hoback, who serves as his party”;s international trade critic, told POLITICO. “;Whenever they have a problem file, they seem to give it to her.”;

Still, some opposition leaders suggested Tuesday that Freeland could be tainted by her association with Trudeau and Morneau, both of whom are being scrutinized for their roles in approving a contract for the WE Charity to manage a C$900 million student grant program. The group has paid Trudeau”;s wife, mother and brother for work at charity events, and WE covered more than C$41,000 in costs for trips Morneau”;s family took with the organization in 2017.

“;She was there,”; New Democrat leader Jagmeet Singh said of the Cabinet meeting where the contract was endorsed.

Conservative finance critic Pierre Poilievre noted that Freeland leads the Cabinet committee focused on Ottawa”;s Covid-19 response that initially green-lighted the contract. “;That is the scandal in which we are involved today,”; he said.

The new finance minister takes over not just an economic reset, but a massive fiscal hole.

An estimate prepared by the government in July predicted the 2020-2021 federal deficit could soar beyond C$300 billion, precipitated by a simultaneous drop in revenue and spike in emergency spending. Ottawa has paid C$2,000 a month to workers who have lost their jobs or seen their hours cut since mid-March because of the pandemic, a program that could ultimately cost upwards of C$80 billion.

“;The decisions made over coming weeks will set the country”;s economic direction for the next several years,”; Canadian Chamber of Commerce President and CEO Perrin Beatty said in a statement ahead of Freeland”;s swearing-in. “;As we emerge into the post-COVID world, we must build on the spirit of partnership that developed during the pandemic to carefully but steadily reopen our economy and encourage the private sector investment and growth needed to protect Canadians”; standard of living.”;

Freeland has a history of being asked to take on challenging, high-profile roles.

The former financial journalist, recruited to run for retiring interim Liberal leader Bob Rae”;s seat in 2013, quickly ascended the ranks of the Trudeau government once he became prime minister in 2015. Freeland started off as international trade minister, wrapping up free trade negotiations between Canada and the European Union.

By January 2017, she was the country”;s top diplomat, though she retained responsibility over renegotiating NAFTA once President Donald Trump made it clear his campaign-trail criticisms of the pact were more than just political overtures. The bilateral relationship in Canada is considered the country”;s most important, as the U.S. is its biggest trading partner and shares with it the longest undefended land border in the world.

When the Liberals were returned to power in the minority in fall 2019, Trudeau assigned the Alberta native the additional role of intergovernmental affairs. Though historically viewed as a second-tier post, the job took on greater significance after an election campaign that saw regional divisions become starker, with Western oil-producing provinces largely rejecting Liberal candidates.

Sweetening the deal, Trudeau also named Freeland deputy prime minister –; a largely ceremonious title not often bestowed upon MPs, though clearly intended to acknowledge her achievements. He also kept Canada-U.S. relations under her management, yet another acknowledgment of her significance to his government. As chair of the Cabinet”;s Covid-19 committee, Freeland played a major role in guiding Canada”;s position on restricting movements over the the countries”; land border once the pandemic swept North America.

Hoback said he doesn”;t expect Freeland to give up her Canada-U.S. responsibilities, noting that the role of finance minister could lend her even more credibility among U.S. policymakers. Still, he said he was concerned that she and other Cabinet ministers with large portfolios are being spread too thin during a critical time.

A Freeland spokesperson didn”;t respond to a request for comment on whether that will remain part of her responsibilities.

Trudeau said he and Freeland have talked about how to create a fairer country for Canadians for nearly a decade. “;She wrote a book on the subject, and has been a key player in my government since day one,”; he said.

For all her bona fides, Freeland is all but certain to be tasked with tough decisions as Canada tries to dig itself out of a pandemic-sized fiscal hole –; choices that could at some point put her at odds with Trudeau.

Freeland declined to describe disagreements they’ve had, though she said she and the prime minister reflected on them Monday “;with good humor.”;

“;My motto has been to have open, candid conversations with the prime minister in private, but also to have a united front when we come out in public,”; she said.