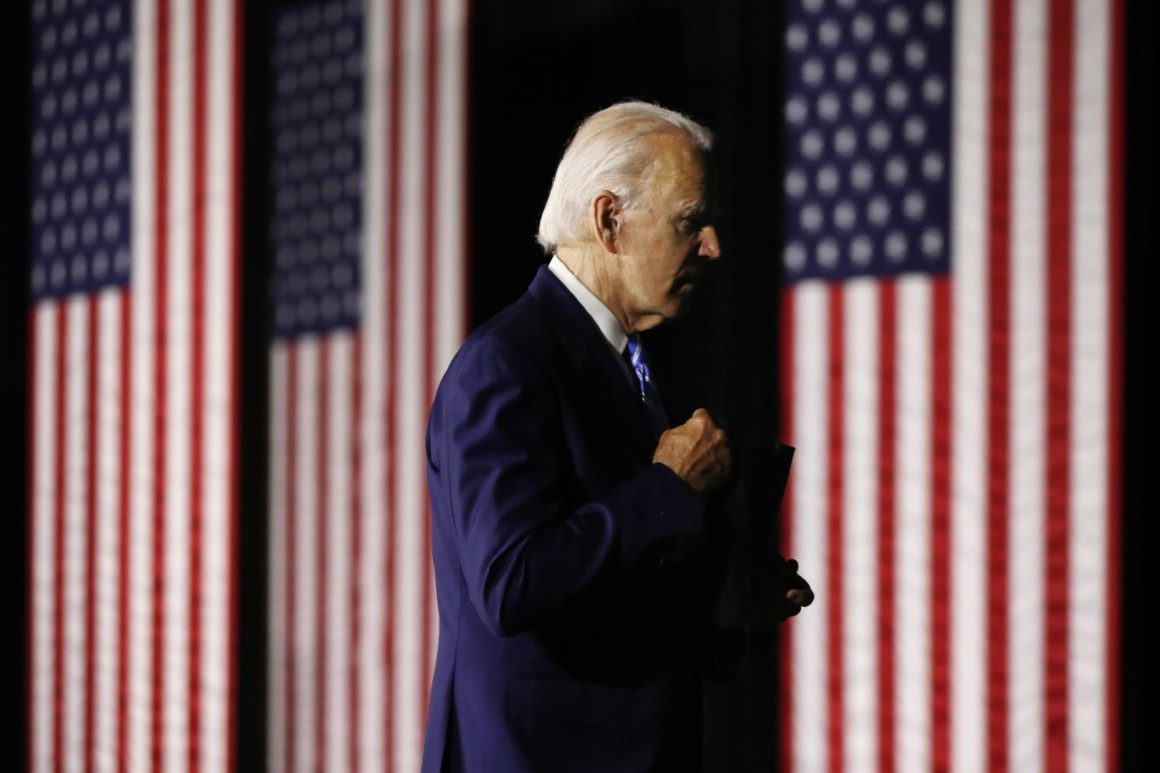 If Joe Biden walks into the Oval Office next January, cleaning up President Trump”;s trade wars will have to wait.

As the country recovers from the coronavirus pandemic, Biden”;s campaign says he would prioritize passing domestic economic stimulus through Congress before negotiating new trade deals.

It’s a strategy that even Democratic leaders who have criticized Trump’s trade war are backing. Rep. Earl Blumenauer (D-Ore.), the chairman of the House Ways and Means subcommittee on trade, said he is not concerned about Biden placing trade agreements outside his top priorities.

“;I don”;t think there”;s a need to rush in and try to pretend that [a new trade deal] is something that”;s going to be a part of a 100-day agenda,”; he told POLITICO, urging Biden to complete a holistic review of Trump”;s tariffs before rescinding any.

The campaign stresses that Biden would quickly reengage U.S. allies spurned by Trump”;s go-it-alone trade policy to combat China. But those efforts would be “;distinct”; from any large international trade pacts, a senior campaign official said.

“;Trade negotiations over big trade deals are something that will in sequence follow a dramatic set of domestic investments,”; the official said.

The Biden campaign’s lack of emphasis on trade issues –; and international relations broadly –; has been evident this week. During the first three nights of Democratic National Convention, speakers virtually ignored Trump”;s trade war while hammering away at the president’s handling of the coronavirus pandemic and ensuing economic downturn.

Still, some trade analysts are skeptical of the hands-off attitude, noting that strong allies like Canada and the European Union will be immediately demanding action on some of the unilateral tariffs Trump has wielded. Others note that many of Biden”;s domestic economic goals, like bringing back supply chain manufacturing from Asia, will require him to pay major attention to trade issues from the start.

Many also wonder how he plans to keep China in line without further harming industries battered by Trump”;s tariffs. Others note it could be unpopular to rescind some duties –; like those on steel that garnered Trump support in Midwest swing states in 2016.

“;Trump is going to leave a lot of trade debris out there,”; said Bill Reinsch, a trade expert at the Center for Strategic and International Studies, mentioning ongoing talks with the U.K. and Kenya, a WTO meeting next June, and worsening China relations.

“;Saying we”;re going to worry about all of it later really isn”;t a viable strategy,”; said Reinsch, who previously served as undersecretary of commerce for export administration in the Clinton White House.

Biden”;s reluctance to discuss trade policy could be glossing over debate in his campaign –; and the larger Democratic Party –; over whether to return to the free-trading agendas of Presidents Obama and Clinton, or to take a more populist tack to reform global trading deals and institutions in an effort to protect the environment and pay workers more.

“;I think there”;s a battle going on,”; said Beth Baltzan, a former trade lawyer for the House Ways and Means Committee, between moderate Democrats who think “;more trade is always better and liberalization is the answer to everything”; and more progressive elements.

“;There are Democrats who were so supportive of free trade, but recognize that 2016 reflected a real frustration among factory workers about the way we”;ve done trade. Those Democrats want to focus on domestic issues. They do not want genuine reform of trade,”; said Baltzan, who was the chief customs lawyer for U.S. trade agreements between 2003 and 2009 before advising Democrats on the House committee.

“;But if you don”;t reform the rules of globalization, your economy is as susceptible to offshoring as it was 20 or 30 years ago," she added.

Democratic leaders in Congress are eager to present a united front with Biden on trade. House Ways and Means Chair Richard Neal (D-Mass.), who is facing a stiff primary challenge from a progressive candidate, said he and the former vice president are “;very much on the same page about supply chains and revisiting the effects of unfettered globalization.”;

“;It is clear to me that revisiting globalization is fundamentally about revisiting the relationship between what we manufacture and what we trade –; and with whom we trade,”; Neal said in a statement to POLITICO, stressing his and Biden”;s agendas are aligned. He added that he”;s confident the Democratic nominee will “;confront our trade policies head on.”;

Blumenauer argued there”;s less tension in the Democratic caucus over its trade agenda than critics believe, saying many members are convinced any new deals need stronger worker and environmental protections than the deals of the past.

“;I think it”;s going to be a new era, but it doesn”;t have to be anything that happens overnight,”; he said. “;There”;s no interest in trade agreements at any cost. That won”;t pass my subcommittee and it won”;t pass Congress, but I don”;t think that”;s what is likely to be an approach of a Biden administration.”;

As models for action, Blumenauer pointed to Democrats”; success in strengthening worker and environmental protections as part of the U.S.-Mexico-Canada Agreement that replaced NAFTA early this year.

Neal highlighted his effort with Senate Finance Chair Chuck Grassley (R-Iowa) to detail parts of the medical supply chain that should be brought back to the U.S. It”;s an idea with some bipartisan support: Sens. Rob Portman (R-Ohio) and Gary Peters (D-Mich.) introduced similar legislation this week.

Regardless of Biden”;s assurances to Congress, his campaign is being decidedly tight-lipped about specific trade policies or potential nominees for U.S. Trade Representative and other posts.

Some progressives are also troubled by the few trade-related developments from the Biden camp. For instance, Obama”;s former USTR Michael Froman co-hosted a fundraiser for the campaign, and arch free-trader economist Larry Summers is among Biden”;s informal advisers, though the former Treasury Secretary has ruled out a formal job in the White House.

Progressive trade watchers see two camps forming in a potential Biden administration, said Tobita Chow, director at Justice is Global, a progressive trade advocacy group. One is made up of of "the neoliberals who want to go back to something more like the status quo which proceeded Trump," while the other features populist Democrats "who maybe want to pursue a softer, gentler form of economic nationalism”; than Trump.

“;What we need is an alternative that aims at restructuring the global economy as a whole," Chow said, "not blaming economic problems in the U.S. on other countries.”;

Abroad, trading partners also expect a Biden administration to be more critical of global trade organizations than Obama, even if his officials are not as aggressive as Trump or his appointees.

“;I think there is a consensus in the U.S. that is fairly critical of [the WTO], more than other countries,”; Jesús Seade, Mexico”;s Undersecretary for North America, warned WTO members last month. “;I don”;t think many of the critiques [the Trump administration] has made will not be shared by the Democrats.”;

Megan Cassella contributed to this article.

Trump rarely mentions his one major legislative accomplishment. That’s because people don’t like it