4 Grammar Myths You Can Ignore

You just want to tell a story in the best way you know how. You work hard to express yourself, observing the rules of grammar you”;ve been taught. But what if those rules aren”;t really rules? 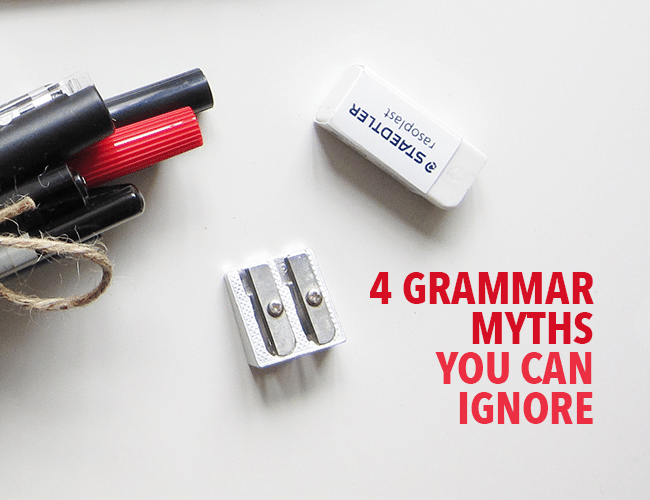 Sometimes, well-meaning teachers and mentors pass on bits of scholarly wisdom based on misconceptions. Often, we try following these rules when breaking them might actually improve and strengthen our writing.

Think of these grammar myths like the urban legends of the literary world. Like the hook-handed escaped prisoner who frequents make-out point or the crazed killer who calls the babysitter from another room in the same darkened house.

They sprouted up somehow and are passed down through generations, often with great enthusiasm, but are they valid?

I”;m in no way suggesting you throw all rules of grammar out the window, but let”;s explore four myths you can disregard if doing so will produce a better story.

In his book Sizzling Style, William Bernhardt points out that none of these four myths are found in the pages of the Chicago Manual of Style. That”;s because they are not rules of grammar, and never were.

Trying to abide by these nonexistent rules can make your writing feel stiff and unnatural. We write stories. Our aim is to pull readers in and carry them along and sometimes, constructing sentences to meet the rules of grammar is not conducive to that aim.

The best way to develop a feel for what”;s appropriate is to read a lot of books in your chosen genre, and I highly recommend that course of action. In the meantime, let”;s take a look at four myths you can ignore when necessary.

1. Never begin a sentence with a conjunction

If you”;re not sure what the conjunctions are, remember FANBOYS: For, And, Nor, But, Or, Yet, and So. This doesn”;t cover all the conjunctions, but it gets you off to a good start. For a more comprehensive list, go here.

Many of us were taught that using these words make bad beginnings for any sentence. But that”;s not true. (See what I did there?)

Sometimes starting a sentence with a conjunction makes the best sense and feels the most natural. To illustrate the point, I”;m including some quotes from widely admired authors:

“;For a long time now I have tried simply to write the best I can. Sometimes I have good luck and write better than I can.”;

“;But you will remember it, in the soft, lost, slumbering moments between waking and true sleep…;”;

–;Robert Frost, from “Stopping by the Woods on a Snowy Evening”

Of course you might argue that this last example is poetry and depends on the conjunction for rhythm. And that would help make my point. Good rhythm, as much as clarity, is an important part of good prose.

2. Never end a sentence with a preposition

You know prepositions–;in, on, about, over, around, etc. There are way too many to list here, but you get the idea. Prepositions are words that express the relationship between elements in your sentence. The Chicago Manual of Style gives no injunction against ending a sentence with a preposition and you should do so when called for.

When it”;s not called for, it often lends a certain yokel quality to lines of dialogue. Fine–;if that”;s what you”;re going for. For kicks, I”;m including a clip from one of my favorite comedians, Brian Regan. Two minutes in, you”;ll hear him use a sentence ending in a preposition in a perfect illustration of how not to do it.

Contorting a sentence in order to avoid ending with a preposition can render ridiculous results. Consider this:

Which sounds more natural? Which draws attention to the words themselves and away from their meaning?

You may not be aware that Winston Churchill won a Nobel Prize for literature. He was a marvelous writer. Going back to Bernhardt”;s book Sizzling Style, he relates an anecdote about Churchill. The story goes that once, when an editor had the gall to correct one of his sentences which ended with a preposition, Churchill changed it back and remarked: “;This is ghastly interference, up with which I shall not put.”;

Here are a few more examples from accomplished writers who flouted this non-rule:

“;I think there has to be an empathic strike between the reader and the protagonist. There has to be something said or known that connects the reader to this person you’re going to ride through the story with.”;

“;To be knocked out doesn”;t mean what it seems. A boxer does not have to get up.”;

“;Nobody wants to read about the honest lawyer down the street who does real estate loans and wills. If you want to sell books, you have to write about the interesting lawyers–;the guys who steal all the money and take off. That’s the fun stuff.”;

An infinitive is the most basic form of a verb. When we discuss infinitives, we”;re usually talking about the infinitive phrase, “;to + verb”;: to be, to run, to eat, to snuggle. That”;s what–;supposedly–;should never be split.

Let”;s take a look at the most famous, long-standing example of a split infinitive. Gene Roddenberry wrote the narration that opens each episode of Star Trek, but it took him several drafts to get it right. When he finally nailed it, William Shatner was called off the set during the filming of The Dagger of The Mind to do the voiceover. Here”;s the original text:

“;Space, the final frontier. These are the voyages of the Starship Enterprise. Its five-year mission: to explore strange new worlds; to seek out new life and new civilizations; to boldly go where no man has gone before.”;

Over the years, it”;s been altered twice. The five-year mission is now its continuing mission. And “;no man”; has become “;no one.”;

But the split infinitive has withstood the test of time. “Boldly” still splits the infinitive phrase “;to go.”; That”;s because it best expresses the spirit of the mission and balances the rhythm of the sentence.

When splitting the infinitive strengthens the writing, increases clarity, or adds style, by all means, split it.

A double negative is a statement containing two negative terms that cancel each other out, like a math equation. For example, “;I didn”;t say nothing”; literally means, “;I said something.”; But the implied meaning is “;I didn”;t say anything.”;

Sometimes we use double negatives in this way during dialogue, if that”;s how a character speaks. That”;s an acceptable use of this improper construction. However, there are times when the proper use of a double negative conveys the nuance of your meaning, making it an ideal choice. Consider these two examples:

The speaker seems to be saying you are super loveable, or maybe I”;m forced to love you, whether I want to or not.

Brad”;s response is a lukewarm evaluation of Andrea”;s story, giving us a pretty good idea of what he really thinks.

A License to Break

When you write your story, your first aim should be to communicate it clearly to readers. That means using words and sentence constructions that get your message across and pull your reader into the story without calling attention to themselves.

To do this, you have to know and use the rules of grammar correctly. You also need to have a feel for when it”;s right to break a rule. Or when there”;s no rule to break.

Remember these four myths of grammar and consider this your license to break these pseudo-rules if doing so will allow you to tell the best story you know how.

Were you taught these four “;grammar rules”; in school? Do you feel freer now, knowing you can break them when called for? Tell us about it in the comments.

Write a scene from your work in progress or use a prompt below. As you write, look for opportunities to begin a sentence with a conjunction, end a sentence with a preposition, split an infinitive, or use a double negative. Put that part in bold.

Consider whether following the “;rule”; or breaking it will do the most good for your story. Rewrite, if necessary, to improve your draft.

Marla opens her mailbox to find something surprising inside.

Bob is planning a trip with his son, Tad.

Jenna waits for her date to arrive and he”;s very late.

Write for fifteen minutes. When you”;re finished, post your work in the comments. And be sure to provide feedback for your fellow writers!

The post 4 Grammar Myths You Can Ignore appeared first on The Write Practice.

Get Ready: Apple Announces Their 2020 iPhone Event Despite Rumored Delays

Helping the Recovery of Community